Self Esteem has very little relation to talent or brains… it’s more about who you ARE than about what you DO… and it’s a lot different from what you CAN do (and often don’t!).

In his essay on Self Reliance, Ralph Waldo Emerson had some wonderful things to say:

“There is a time in every man’s education when he arrives at the conviction that envy is ignorance; that imitation is suicide; that he must take himself for better, for worse, as his portion; that though the wide universe is full of good, no kernel of nourishing corn can come to him but through his toil bestowed on that plot of ground which is given to him to till. The power which resides in him is new in nature, and none but he knows what that is which he can do, nor does he know until he has tried.”

“The eye was placed where one ray should fall, that it might testify of that particular ray. We but half express ourselves, and are ashamed of that divine idea which each of us represents… God will not have his work made manifest by cowards.”

“Nothing can bring you peace but yourself.” 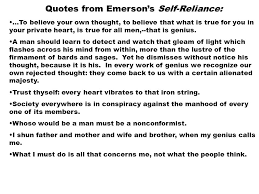